The Novation Launchpad is a MIDI controller designed to be used with Ableton Live, but is flexible enough for most applications. For our performance of In C, I wanted to build an instrument that could trigger all 53 phrases of the piece and use the remaining buttons as a simple drum sequencer. The Launchpad’s multi-color LEDs provided enough visual feedback that I only needed to look at my laptop screen to manually adjust the position of the Score Viewer application.

For more information about our Fall 2016 performance of Terry Riley’s In C, including performance excerpts and details about the piece, check out this post.

The Launchpad has an 9x8 grid of buttons which can be addressed by MIDI note messages, where the pitch value is the particular button and the velocity value is the color to be set. It also has an additional row of eight buttons addressable with a sepearate MIDI message type, similar to the grid. Having 80 buttons is more than enough to have an individual button for each In C phrase, so I assigned the top portion of the grid to playing phrases and the bottom portion for a simple drum sequencer. The tricky part was mapping button presses to particular functions, which I originally tried doing using modulo math in an expr but conceded to using a coll object. For some reason the first row starts at zero and goes to eight, then each row starts on the next multiple of sixteen (16, 32, 48, etc.).

Novation provides a really nice set of features for addressing more than one LED at a time, for example sending a 0x92 followed by a sequence of nine velocity values will set the colors of the whole top row (this is how I display the current drum sequences). There is also a SysEx message for displaying ASCII messages, which I use at the end of the performance to display “Terry Riley’s In C”.

Due to time constraints and workload I did not make anything fancy in regards to sound design. Instead my main instrument is The Giant, which is a sampled Klavins piano hosted inside of Native Instrument’s Kontakt VST sampler. This wound up being a good choice to offset the large presence of bright additive and FM synthesizers. For the drum sequencer I am using a simple FM-based kick drum and a sampled rimshot I recorded at home.

David Wetzel’s player abstraction provides octave and 8th note shift controls, which I have mapped to the top row of the Launchpad. One particular feature I am proud of is that the intensity of the octave button color matches the level of the octave shift. There is also a button toggle for the ostinato, which wound up being less useful than the velocity control I added to the master patch window: 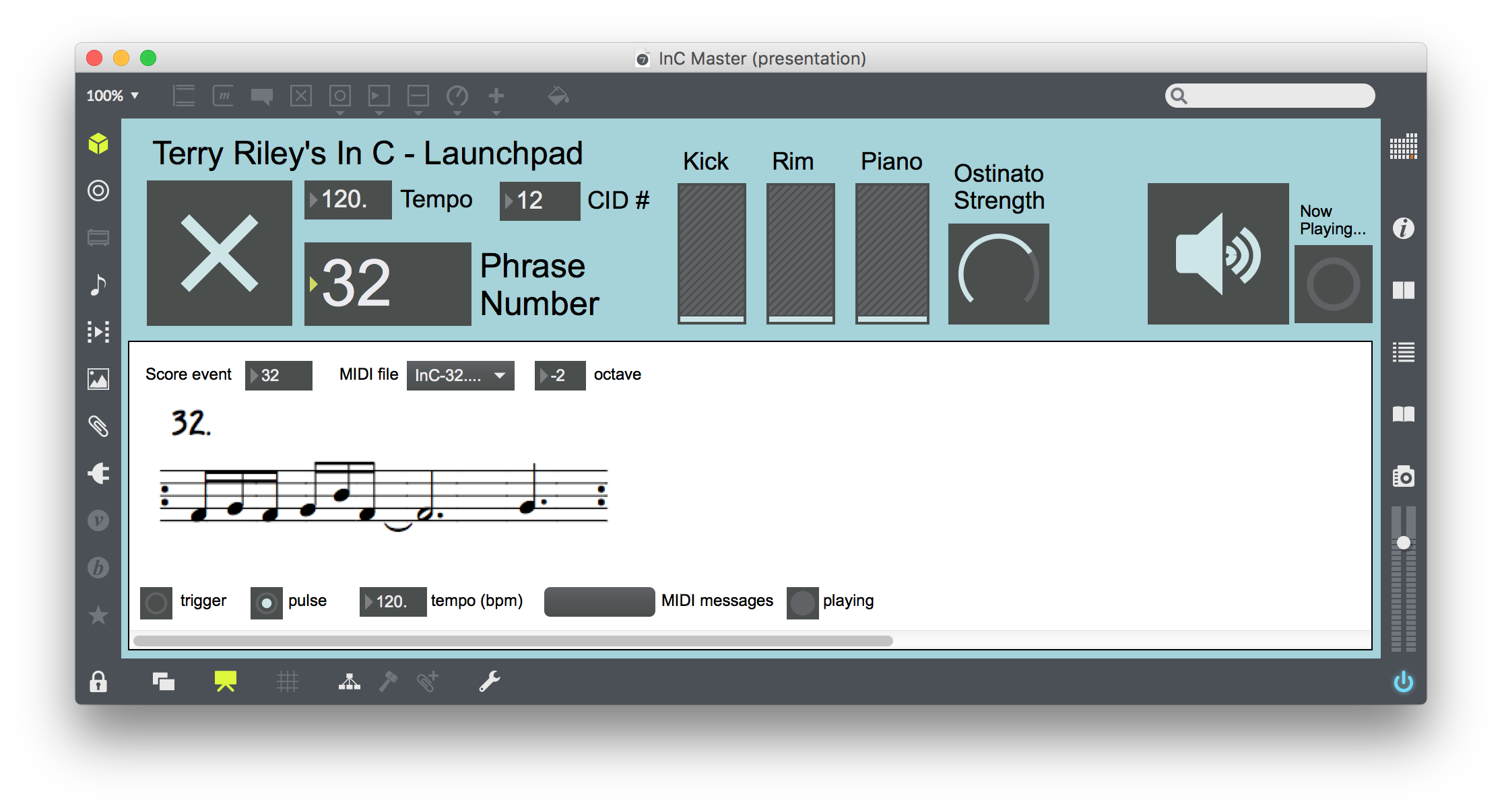 The top six rows of the grid map to a different In C phrase, which when pressed will light green while playing and will turn a dull amber upon completion. The latter was added to keep track of which phrase was played last, in case I have to turn away from my rig (credit to David for the idea). The bottom two rows are the kick drum and rimshot 8th note patterns respectively. Each row has a ninth button on the right that will clear out the current pattern. 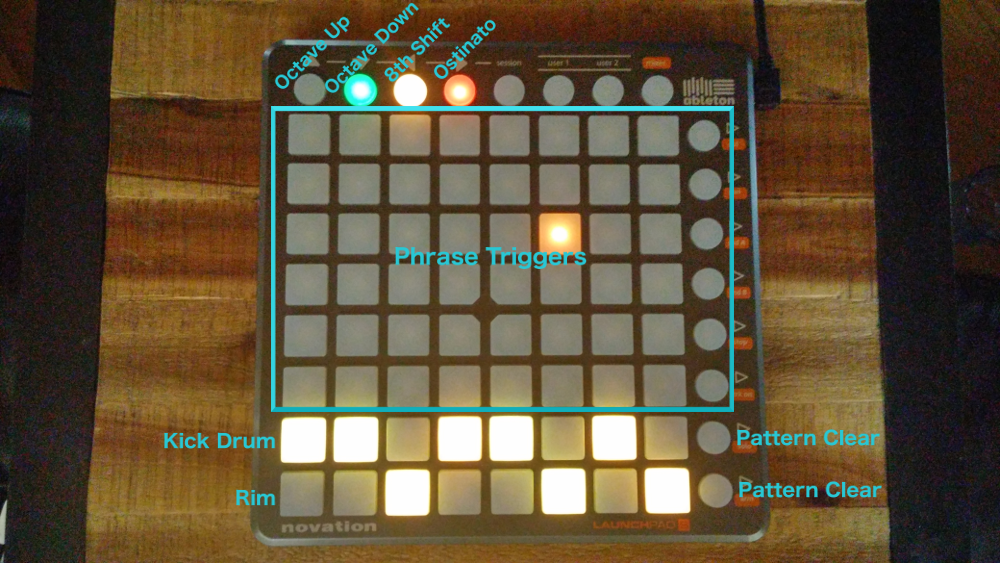 There is currently one remaining bug in my logic, where the last played phrase LED gets wiped whenever the drum sequence is changed. This due to how I render drum patterns, which uses the rapid LED change feature. To access the bottom row, I have to move the cursor down six rows which will wipe any LED that is current lit. Either I need to stop using this feature or I need to include the state of playback when shifting the cursor.

I have four remaining buttons in the top row that I would like to use for ostinato strength, and volume for the piano, kick, and rimshot. My plan would be to use two buttons to increment and decrement volume, and use a third button to cycle between which setting to change. There is also one last button in the sixth row, which I might use to toggle phrase looping.

In the future, we will be putting the instruments we used to perform with in a GitHub repository. Until then, if you desperately need access to my code I can send you a zip archive (me@griffinmoe.com)